Colourful and ornate examples of Indian jewellery are available to buy at regular auctions on thesaleroom.com. A golden gem-set maang tikka (forehead ornament) made in Southern India in the 19th century. A typical piece of bridal jewellery, it features rubies, emeralds, seed pearls, white stones (possibly faceted white sapphires) and a crescent-shaped pendant filled with a flower. It sold for £480 at Chiswick Auctions in October 2019.

Items may appear in a dedicated jewellery auctions or specialist ‘Indian and Islamic Art’ sales (sometimes they may be titled ‘simply ‘Asian Art’).

As well as dating from across the centuries, Indian jewellery pieces appearing at auction have a wide variety of forms including rings, brooches, bracelets, beads, maang tikka (traditional pieces of head jewellery), tiaras, necklaces, earrings and pendants.

Plenty of items may have originally been made for ceremonial purposes including pieces of Indian bridal jewellery. Indeed, objects with gold or lustrous surfaces incorporating precious stones remain a popular choice of marriage jewels and numerous pre-owned examples frequently appear at auctions.

In terms of antique and vintage jewellery, many pieces were made in the vast network of workshops across India especially the important centres like those in Jaipur in Rajasthan, Gujarat and Goa.

Later reproductions that followed earlier styles are also available and can be a much more affordable option if you’re on a budget. Prices of Indian jewellery at auction can range from under £100 and up to thousands of pounds for rarer, earlier and higher-quality pieces. Indian jewellery is known its colour and flamboyance – something that often comes from the use of gemstones. Indian jewellery frequently incorporates rubies, emeralds, diamonds, pearls and jade, while precious materials like gold, silver, enamel and even glass tend to feature prominently as part of the design too.

Some items are defined as ‘Navaratna’ which literally means ‘nine gems’. They were produced in such clusters not just used to display an array of colour but also because certain combinations are considered auspicious, sacred or royal in Indian culture. A spinel and navratna gem-set necklace from North India and dating from the 20th century. It sold for £1700 at Chiswick Auctions in October 2019.

Values that items sell for are more strongly determined by the size and weight of the precious stones – the more carats the higher the value – compared to pieces of European jewellery. The Indian market has long given higher status to items with more prominent stones as opposed to the cut and clarity of the gemstones. This is why you will see Indian stones that do not sparkle in the same way as stones sold in European jewellery where the brilliance is more highly prized.

This does not mean that an attractive design or early date will not add to its value – these are also key factors as well that collectors and general buyers will factor into their bidding.

Many items feature highly-crafted decoration such as floral patterns and some buyers may choose to focus on these features too. 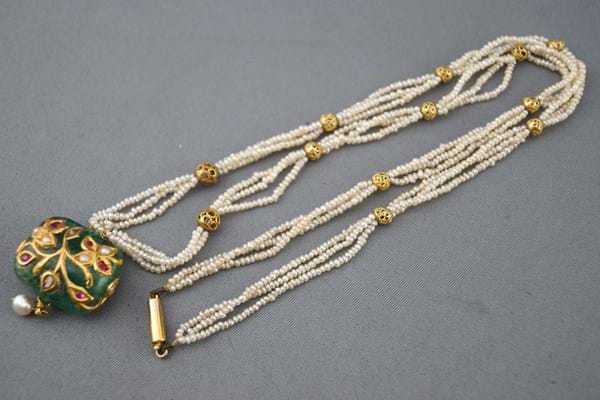 The condition of a piece of Indian jewellery will also play a key part in its value, so always read the lot description carefully before bidding and feel free to contact the auction house to request a condition report or more photographs.

If the auction house selling the item you are interested in is nearby, you can also attend a viewing day to inspect the lot in person.

As with great pieces of Indian art more generally, much of the jewellery has been produced in the Indian sub-continent over the centuries was made under the auspices of a prominent culture or patronage of a ruling court. Today, the names of different periods or cultures may appear in lot descriptions at auction such as: Decide how much you’d like to spend and use the search facility on thesaleroom.com to find Indian jewellery coming up for sale. You can filter your search by, among other things, price and by location of the auction house to narrow down your selection.

Make time to bid for these watches