12 May 2021 A huge porcelain breakfast service made to welcome Queen Victoria and Prince Albert on their first visit to Scotland in 1842 comes for sale at an online auction this month.

The historic Worcester service of more than 280 pieces, each painted with sprigs of heather and the family coronet, is among 43 lots of property from the Earls of Breadalbane & Holland that go under the hammer at Lyon & Turnbull on May 18.

All were previously among the furnishings of Taymouth Castle where, at the peak of their wealth, power and influence, the family lived from the early 18th century until 1922.

This porcelain service was part of a massive upgrading project that preceded the royal visit to Taymouth Castle on September 7-10 1842. John Campbell, 6th Earl of Breadalbane and Holland (1824-71) hired some of the finest craftsmen or the era to complete his renovation plans and commissioned the Worcester porcelain factory to add numerous pieces to the family dinner service.

During the royal visit, meals were provided for over 700 people each day. While royal invitees would have lunched and dined on silver, breakfast and refreshments would have been served from the Breadalbane porcelain service.

It was the Victoria and Albert’s first journey North of the Border and one that would begin the queen’s love-affair with the Scottish Highlands and prompt the purchase of Balmoral in 1852.

Victoria enjoyed Breadalbane’s tartan-clad ‘Scottish’ experience immensely, commenting in her journal: "It seemed as if a great chieftain in olden feudal times was receiving his sovereign”.

The Breadalbane heather service is expected to bring £2000-3000. When in 1762 John, 3rd Earl of Breadalbane (1692-1782) wished to have this portrait painted of his eldest son he chose, at a cost of £42 7s, the most fashionable artist of the day, Thomas Gainsborough.

This ‘Bath period’ portrait of John Campbell, Viscount Glenorchy was painted by Gainsborough c.1763 while the family was ‘taking the waters’ in the city. The previous year Viscount Glenorchy had married Willielma Maxwell (stepdaughter of Lord Alva) receiving Taymouth as a wedding gift.

The story did not end as hoped. Gainsborough was famed for his ability to catch a likeness and, even with aile-de-pigeon bag-wig, and a fine worsted green and gold suit, the Breadalbane heir looked a slight, sickly figure. Lord Glenorchy (1738-1771) would predecease his father, aged just 33, leaving his much younger sibling to become the 4th Earl. Gavin Campbell (1851-1922) the 7th Earl of Breadalbane was a prominent society figure and Liberal politician in the Gladstone administration but is best known in collecting circles as the owner of a vast collection of silver.

Much was dispersed at sales in 1926 and 1935 but a handful of pieces were saved by the family including a very early English Apostle spoon dating from the reign of the War of the Roses era monarch Edward IV (1442-83).

Although earlier spoons have survived, this Edward IV example with a St Simon terminal documents an important moment in the history of British silver: it dates from 1478, the first year that a ‘date letter’ was used in the hallmarking system. It subsequently became a cornerstone of the oldest, continual and still virtually unchanged form of consumer protection in the world.

Despite the addition of a later gothic letter B and a coronet – probably added by the 7th Earl who had collector’s marks engraved to much of his holdings – it is guided at £2500-4000.

View the catalogue entry for this early English Apostle spoon on thesaleroom.com. This George I seal box by Francis Garthorne (London 1726) belonged to John Campbell, 3rd Earl of Breadalbane & Holland (1692-1782) who had been ambassador to both the Danish and Russian courts.

The box still retains the Royal Charter that granted him plenipotentiary powers and a wax impression of the great seal of George I. 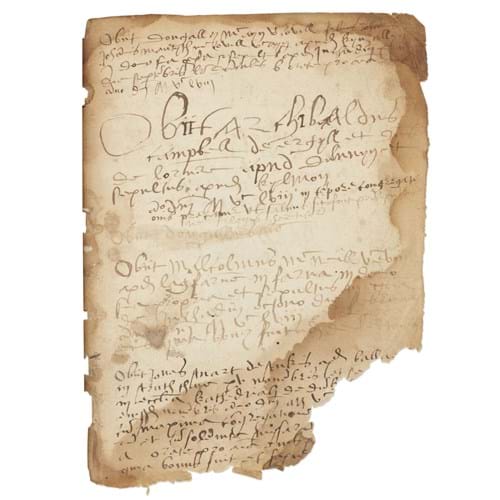 Recorded at Taymouth since the 1855, is this rare 16th century manuscript penned in three languages – Latin, Gaelic an Middle Scots.

The 36 quarto page miscellany known as The Chronicle of Fortigall was compiled in Perthshire between 1554-79. Written in a number of different hands it contains passages of local and wider history, diary entries, stanzas of poetry, proverbs and aphorisms plus commentaries on religion and belief that betray a consistent Catholic allegiance.

It is closely related to the Book of the Dean of Lismore, probably the most precious surviving Gaelic manuscript of Scottish provenance, and it may be that they were penned by different generations of the MacGregor family.