05 November 2021 A collection of Staffordshire pottery portrait figures amassed by the headmaster of one of Britain’s finest public schools comes for sale this month. Staffordshire portrait figure of the Alphington Ponies – £100-£150 at Hansons.

When the late Dennis Silk, an English first-class cricketer, friend of war poet Siegfried Sassoon and warden of Radley College in Oxfordshire from 1968-1991, bought his first figure at an antiques shop in Dorset in 1968, a small obsession began.

Staffordshire portrait figures – a vast cast of contemporary characters in ceramic form – were a phenomenon of the Victorian era.

Advances in press moulding and slip casting meant pottery figures could be made relatively cheaply, while decent likenesses became possible from the 1840s when good quality illustrations were made available in the form of sheet music, playbills, penny prints and the Illustrated London News.

Catering to popular opinion, the royal family was by far the most common subject but topical military and naval subjects, statesmen and politicians, stars of theatre, circus or sport were also strong sellers.

Staffordshire during the 19th century was a centre of non-conformist religious activity, something reflected in the range of portraits produced of Methodists and Baptists. More curious was the popularity of figures of criminals: notorious murderers of the period were also captured for posterity and commercial gain.

Although today Victoriana is often tarred with the brush of ‘old fashioned taste’ this is a collecting area that rewards anyone with a love of social history.

The Silk collection, for sale at Hansons auctioneers at Bishton Hall, Staffordshire on November 12, numbers 261 different figures that cross the full spectrum of subjects – heroes to villains. Alan Sturrock, president of Staffordshire Figure Association, is quick to praise its contents: “It is a very comprehensive collection put together over some 40 or 50 years with the care and eye of a man who certainly loved and knew his subject.”

Most lots, with estimates from £10-20 up to £500 for rarities, are catalogued with reference to the classic text on the subject: Staffordshire Portrait Figures and Allied subjects of the Victorian Era by Surgeon Rear Admiral PD Gordon Pugh, a book revised many times since it was first issued in 1970. Admiral Pugh’s own collection was acquired by the Potteries Museum & Art Gallery in 1980 with many of its highlights on permanent display.

Here is a selection of lots available at the Hansons sale. William Palmer (1824-56), also known as the Rugeley Poisoner or the Prince of Poisoners, was an English doctor found guilty of murdering his friend using strychnine in one of the most notorious cases of the 19th century. Staffordshire during the 19th century was a centre of non-conformist religious activity and many figures were made depicting key figures from the Methodist and Baptist churches.

This rare figure of the Welsh nonconformist minster Christmas Evans (1766-1838), deemed one of greatest Baptist preachers of the age, is guided at £300-500. The perpetrator of a double murder at Stanfield Hall on November 24, 1848 was commemorated by the Victorians in print and in pottery. James Bloomfield Rush (1800-49), a delinquent tenant-farmer who conducted a devious scheme to defraud his landlord was hanged at Norwich Castle. The year 1877 brought war between the Ottoman and the Russian empires. The two protagonists Tsar Alexander II of Russia and Abdul-Hamid II of Turkey are shown in this pair of equestrian figures estimated at £300-400. 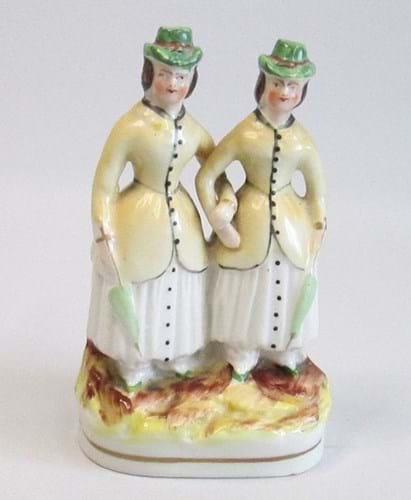 Staffordshire portrait figure of the Alphington Ponies – £100-£150 at Hansons.

The twin sisters, Arabella and Eliza Durnford, were well known in Torquay in the 1840s for their eccentric behaviour: promenading the town arm-in-arm wearing identical costumes. As they had arrived from Alphington riding ponies and a trap, they were nicknamed the Alphington Ponies.

This miniature Staffordshire group of the Durnford sisters has a guide of £100-150. In a case known as the ‘Bermondsey Horror’, Swiss domestic servant Marie Manning (1821-49) and her husband were convicted of the murder of her lover, Patrick O’Connor. She was hanged on the roof of Horsemonger Lane Gaol in 1849. Estimate £200-£300. Although a celebrity in his own time, inventor James Sadler (1753-1828) is largely unknown today. He was the first English aeronaut, making his ascent in a balloon on October 4, 1784 from Christ Church Meadow in Oxford and travelling around six miles to Woodeaton. Silver selection: Collectable pieces coming up at auction that can also still be used today