Your guide to this spring's Asian art sales - Part I

30 April 2022 The market for good quality Chinese antiques remains very strong - and a focus for many of the UK’s fine art auctioneers. A clutch of salerooms hold regular specialist sales devoted to Chinese, Japanese and other Asian works of art - typically in autumn and again in late spring. All price points and periods are represented from a huge range of different nations and cultures. Here – in the first of two consecutive preview articles - we highlight some of the forthcoming May sales available to view and bid at via thesaleroom.com. This rare 18th century painted enamel ‘Jesuit’ bowl is decorated with European subject matter – a continuous landscape scene of ladies and gentlemen at leisure attended by young boys dressed as putti. Measuring 5in (12cm) across, both the base and the cover are inscribed in black enamel with an eight-character Jesuit mark.

Using early enamel colours, it probably dates prior to 1735, and would probably have been made for one of the Jesuit missionaries at the court in Beijing. Part of the Asian Art sale at Bonhams Knightsbridge on May 9-10, it is being sold without reserve with an estimate of £800-1200. 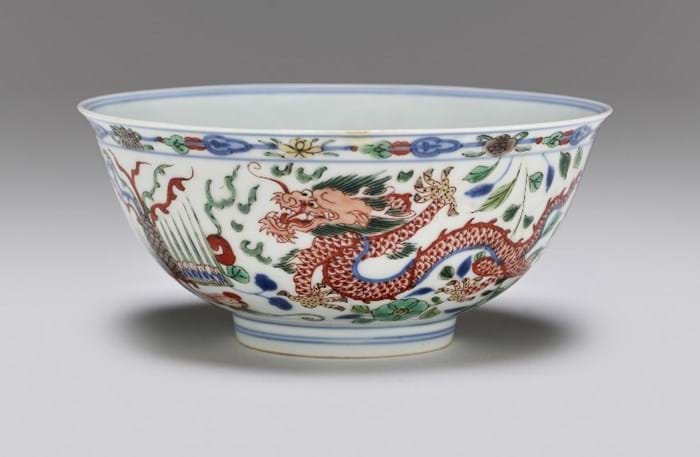 This Jiajing (1525-66) mark and period wucai dragon bowl will be offered for sale at Woolley & Wallis in Salisbury on May 17. It comes by descent from the collection of Admiral Robert Coote (1820-98).

The China Station, established by the British Royal Navy in 1865, had bases located in Singapore, Hong Kong and Wei Hai, and was responsible for overseeing the coast of China and its navigable rivers, the western part of the Pacific Ocean and the waters surrounding the Dutch West Indies.

The base of the 7in (17.5cm) diameter bowl is drilled with three small holes in the shape of a triangle - a curious practice (perhaps an inventory or collectors’ mark) that appears to have been common in Islamic countries. The same pattern is found on 54 Ming porcelains in the Topkapi Museum collection, Istanbul. Led by Asian art specialist Lee Young, Dore & Rees will conduct a sale of Fine Asian Art in Frome on May 16. The offering includes this large baluster square-form qianjiangcai enamelled vase painted to one side with a figure on a donkey beside verdant mountains and to the reverse with two cranes perched in a pine tree.

The inscription translates as 'Walking alone on the back of a donkey, the cloud and green mountains approaching nearer, made by Xuělì Chéngmén, in the 9th month, autumn of the year ren-wu (1882).

Cheng Men (1833-1908) was a porcelain painter active during the late Qing dynasty. He practiced in the qianjiang enamelling style, characterised by its use of a restrained palette in pale washes, giving the look of watercolours. The 18in (46cm) high vase, inherited by the West Country owner in the 1980s, is estimated at £5000-10,000. This 2ft (60cm) tianqiuping or ‘heavenly globe vase’ is seemingly the only one known with this decoration.

It is worked in a striking palette of gold and (slightly raised) silver against a vivid blue ground with bats and flying cranes, each holding emblems associated with the eight immortals of Daoism. The message is one of longevity and prosperity.

The vase bears a six-character mark of the Qianlong period (1736-1795) and is of the period suggesting it has an imperial past.

It was purchased by a surgeon in the 1980s for a few hundred pounds and passed from the original owner to his son, who for a while, displayed it in his kitchen. Mark Newstead, specialist consultant at Dreweatts for Asian Ceramics and Works of Art, first saw it in the 1990s. Bonhams holds a sale titled Polish and Poise: Japanese Art Through the Centuries sale at New Bond Street on May 12.

This fine pair of cloisonné-enamel musen and moriage presentation vases are by the Ando Jubei Company. Each vase is decorated partly in relief and finely worked in musen and yusen enamels. They were created after a design by Watanabe Seitei, one of the first Nihonga (Japanese-style) painters to visit Europe, attending the 1878 International Exhibition in Paris. Vessels of archaistic form were popular in the Qing who wished to emulate the perceived virtues of antiquity.