Sketching out the details: Five drawings and works on paper from Woolley & Wallis’ picture sale

30 July 2021 While oil paintings tend to command higher values at auction, drawings and works on paper are a more affordable option and can make an excellent launch point for collectors just starting out. 'A view of the Thames at Battersea Bridge' by Walter Greaves – estimated at £300-500 at Woolley & Wallis.

While works in this category are regularly available at auction thesaleroom.com, here we pick out five works at the Woolley & Wallis sale of Old Masters, British & European art on August 11-12.

A view of the Thames at Battersea Bridge by the painter and draughtsman Walter Greaves (1846-1930), pictured above, is among the lots on offer at the Woolley & Wallis sale. The son of a London shipbuilder, river scenes were among his favoured subjects.

View the catalogue entry for this Walter Greaves drawing on thesaleroom.com. Nocturnal scene with figures by a lake, catalogued as circle of Richard Wilson – estimated at £300-500 at Woolley & Wallis.

A depiction of figures by a lake is also on offer at the Woolley & Wallis sale with a £300-500 estimate. The nocturnal scene is by an artist from the circle of Richard Wilson (1714-82).

Richard Wilson was a Welsh artist who became one of the leading landscape painters of his generation, becoming a founder member of The Royal Academy in 1768. He had several pupils and apprentices working alongside him at his studio in Covent Garden, including most notably William Hodges and Thomas Jones, although there were also numerous imitators of his classically-styled landscapes.

Executed in pencil and charcoal on blue paper and heightened with white, the drawing here measures 14 x 19.75in (16 x 50cm).

View the catalogue entry for this nocturnal scene on thesaleroom.com.

3. Portrait of a young girl 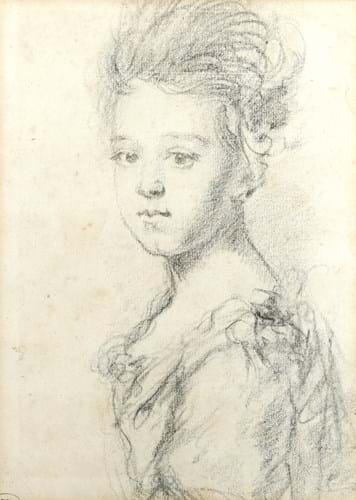 Portrait of a young girl by Sir Godfrey Kneller – estimated at £300-500 at Woolley & Wallis.

Among a number of portraits at the Woolley & Wallis sale is this black chalk sketch of a young girl by Sir Godfrey Kneller (1646-1723).

Reitlinger was a major collector of Old Master drawings as well as many other objects including Chinese porcelain and Renaissance works of art. His collection was auctioned at Sotheby's after his death with seven auctions in total required to disperse all the works. This drawing featured in the second auction held in January 1954.

View the catalogue entry for this Godfrey Kneller drawing on thesaleroom.com. The Prix de Rome was a French arts scholarship which dates back to 1663. Students received an award with an annual bursary and prizes were awarded each year for painting, sculpture and architecture.

This sketch was exhibited at an Art Council of Great Britain show in London tilted Berlioz and the Romantic Imagination in 1969. It is estimated at £100-150.

View the catalogue entry for this French School drawing on thesaleroom.com.

5. An artist with easel A drawing of an artist at his easel by Arthur Herbert Orpen – estimated at £200-300 at Woolley & Wallis.

View the catalogue entry for this Arthur Herbert Orpen drawing on thesaleroom.com.