25 April 2022 With spring well established and hints of summer just around the corner, people are excited to refresh their walls by adding an attractive piece of Modern and Contemporary art to their homes. One of John Bratby's sunflowers pictures offered at Halls.

On thesaleroom.com, you’ll find plenty of works in this category on offer at regular live auctions. But an increasing number of timed sales are also being staged which allow you to place a bid right now.

Among them is the Modern and Contemporary art auction at Halls Fine Art which closes on May 2. It offers over 240 lots ranging from life-sized standing sculptures, works on paper, oils, watercolours, bronzes and contemporary ceramics. The auction house says “there is something for every taste and every budget”.

Closing a week later on May 9 is a timed picture auction at Anderson & Garland with a number of works by Contemporary artists among the more-than 270 lots.

Below is a selection of six works on offer at the two sales. This view of St Ives harbour is by John Anthony Park (1880-1962). It was discovered in the cellar of a local house following the death of the vendor’s relative. It is believed to have been bought in 1939 while the relative was on her honeymoon in the Cornish coastal town. John Anthony Park was heavily influenced by the Impressionist and Post-Impressionist movements, his style is characterised by short brush strokes and a rich, colourful palette. St Ives Harbour was his favoured location to paint en plein air. This example is estimate at £2000-4000 at Halls. View the catalogue entry for this John Anthony Park painting on thesaleroom.com. Among the pieces in the Halls sale with interesting back-stories, this painting of a procession walking down a street towards Swinton Church by Charles M Jones (1923-2008) includes an image of the artist himself as a young boy among the crowd. It is offered together with a further work titled Altar Boy and estimated at £200-400. View the catalogue entry for this Charles M Jones painting on thesaleroom.com. The sale will also include seven drawings by Alan Lowndes (1921-78) consigned from the family of the artist. Among them is a view of Longchamp racecourse, a 9in x (23 x 31cm) sketch which is signed and dated 1959. It is estimated at £200-300. View the catalogue entry for this Alan Lowndes drawing on thesaleroom.com. One of the highlights of the Halls sale is a large painting of sunflowers by John Bratby (1928-1992). The 4ft x 3ft (1.22m x 91cm) signed oil on canvas is one of numerous examples of the subject by the ‘Kitchen Sink' artist. Typically large, this one is billed as a “bursting with vibrant colour” and demonstrating “Bratby’s skilful use of colour and line” according to the Shropshire saleroom. It has come to auction from a private local collection having been purchased by the vendor's father who was a controller at the BBC. It is estimated at £5000-7000. View the catalogue entry for this John Bratby sunflowers picture on thesaleroom.com. 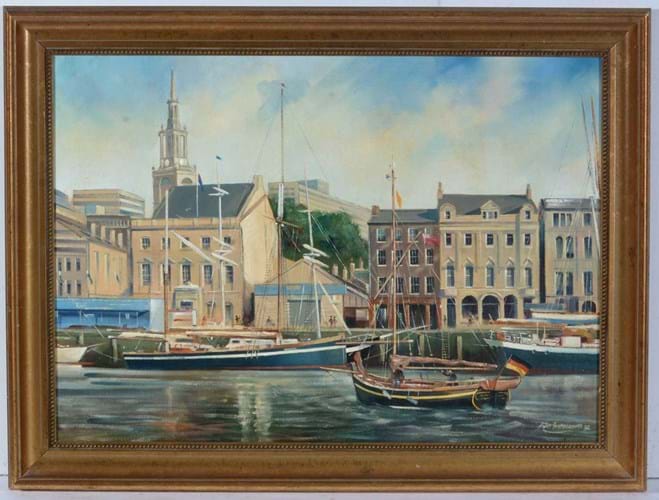 At a separate sale, among the pieces by Contemporary artists at Anderson & Garland’s timed auction of pictures that closes on May 9 is this view of Newcastle Quayside by John Coatsworth. A local artist born in Newcastle, he is self-taught and is now a freeman of the city. This picture dates from 1992 and is estimated at £150-250. View the catalogue entry for this John Coatsworth picture on thesaleroom.com. Jonathan Shaw’s paintings are known for their vivid colours, sweeping skylines and smouldering horizons. One is on offer at Anderson & Garland’s timed auction. Titled Midnight Skies VI, it is estimated at £100-200. View the catalogue entry for this Jonathan Shaw picture on thesaleroom.com.