21 January 2022 At the end of last year Suffolk auction house Bishop & Miller launched a series of designated oak furniture and works of art sales with the input of former Bonhams specialist David Houlston. 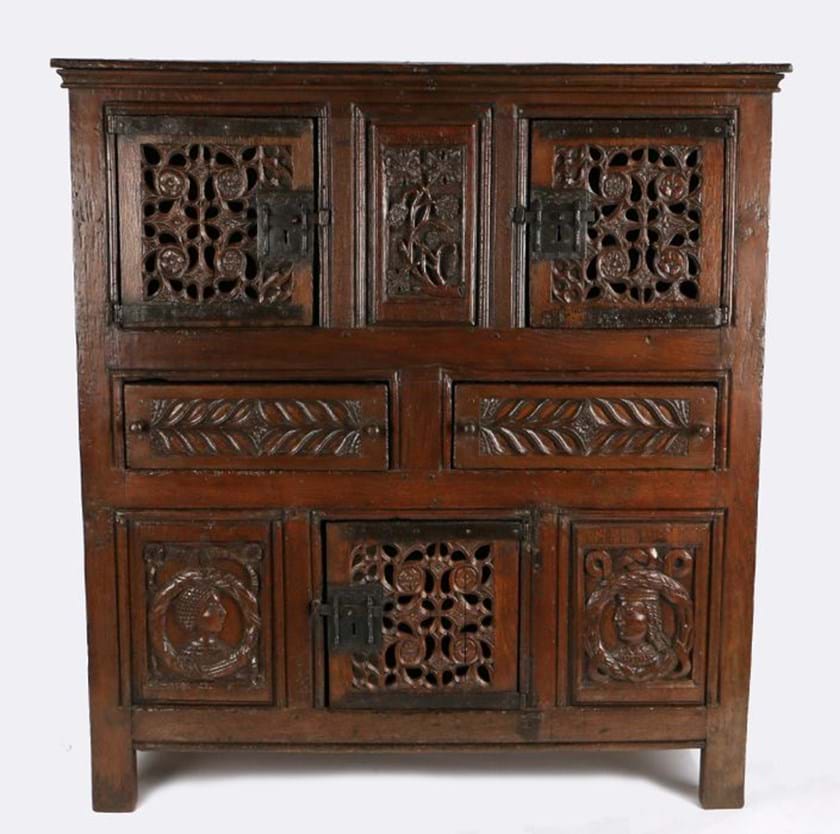 Houlston spent 15 years heading Phillips’ and then Bonhams’ vernacular furniture sales but earlier this year moved to a consultancy role. Based in the Cotswolds, near Stow-on-the-Wold, he and wife Carolyn, previously a textiles specialist at Phillips, are dealing from home and online.

Houlston’s departure marked the end of the regular Oak Interior sales at Bonhams held in Oxford with most items now being removed to Knightsbridge for sale.

Here are five ideas on what to buy at The Collector: to include Period Oak and Folk Art.

‘Magnificent’ is the word use in the catalogue to describe this impressive and rare Henry VIII joined oak aumbry or livery cupboard, c.1520 (pictured top). The front follows a traditional arrangement for enclosed livery cupboards dated to the first-half of the 16th century - divided into three horizontal sections or registers.

The item is a hefty 1.33m wide x 60.5cm deep x 1.44m high. The saleroom says: “The rarity of this high-status cupboard is enhanced by the presence of drawers. Drawers were seldom found on late 15th to early 16th century English furniture. Furthermore, they are normally comparatively crude, with the drawer(s) simply running on a baseboard or supported either on carcase rails and/or a simple under- bearer.

“Here, however, the drawers are supported not only by the frame, but importantly by the edges of their base boards. Both drawer side linings are inset, allowing the baseboard edges to be exposed and engaged within grooved drawer runners fitted to the frame of the cupboard. This method of construction allows for smooth operation of the drawers.” The auction includes, estimated at £2000-3000, this oak and polychrome ceiling boss. Dating to c.1400, it is carved with an Old Testament prophet within a roundel measuring 18.5cm across.

Rather than a purely decorative cap, the mortised ‘base’ suggests this was designed as a load-bearing structural boss that acted as a ‘key-stone’, locking together the intersecting ribs of a vaulted ceiling. It is made from coarse-grained oak, that although difficult to carve, is exceedingly strong.

View the catalogue entry for the oak and polychrome ceiling boss on thesaleroom.com. If you don’t bid for this rare and impressively large pair of 14th century limestone gargoyles, c.1320, you could visit York Minster instead where similar examples can be seen on the Chapter House.

Both are designed with grotesque human faces, with wide open mouth, one as a kneeling and draped human figure, the other of zoomorphic form, squatting on its haunches and restraining a dog between its knees, on square plinth, both carved from a single-piece of stone and designed outwards from a tall vertical structure. They stand an impressive 1.41m high.

View the catalogue entry for this pair of 14th century limestone gargoyles. This may be called a Glastonbury-type armchair and, although it looks like a folding chair, it’s probably best not to take it to the Glastonbury festival. It is not in fact a folding chair; it is over 400 years old and it would be a shame to leave it among the other discarded tents etc considering it is estimated to be worth £3000-5000.

The Elizabeth I oak Glastonbury-type armchair, c.1600, is 62cm wide x 59cm deep x 87cm high, the seat 42cm high. Although it can’t fold as such, it is constructed with removable pegs and designed to be taken apart, in the manner of campaign furniture.

The generic name 'Glastonbury Chair' is believed to originate from a chair reputedly made for John Arthur Thorne, the last treasurer of Glastonbury Abbey, executed in 1539, the year the abbey was dissolved.

Bid for the Elizabeth I oak Glastonbury-type armchair on thesaleroom.com. For a ‘more affordable’ option in the auction, but with plenty of presence still, try this George II oak chest of drawers, East Anglia, c.1750.

This George II oak chest of drawers is available to bid on via thesaleroom.com.