06 October 2021 Lego is arguably the world’s most famous toy brand and a large collectors' market exists for desirable and hard-to-find pieces. Lego is usually valued by rarity, condition, completeness (ie. how many pieces does it have and how many are missing), how impressive the finished model looks and also whether it comes with its originally packaging and whether or not the box has been opened.

While pieces of Lego can be found regularly at auctions on thesaleroom.com, a single-owner collection with hundreds of models including many retired and rare lots is being offered at Cottees Auctions on October 23.

Here is a selection of five lots from the sale

The ‘Cafe Corner’ (model number 10182) was one of the more detailed and realistic models. It was first released as part of a suite of modular buildings made by Lego. The model, which came with three mini townspeople figures stands over 14in (36cm) high.

This example at the Cottees sale, pictured above, comes complete with its original box and instruction manual, and is virtually complete (it is missing a bench). It is estimated at £300-500.

View the catalogue entry for this Lego ‘Cafe Corner’ on thesaelroom.com. Lego’s Taj Mahal is among its most famous creations with the model being much admired for the detail if its architectural features with its domes, minarets, arches, finials and stairs. A real challenge to build, it comprised over 5900 pieces in all and stands over 16in (41cm) tall.

This example from the collection being offered at Cottees comes with its original box and outer postage box. It is estimated at £400-450.

View the catalogue entry for this Lego Taj Mahal set on thesaleroom.com. Some of the most popular Lego models relate to tie-ups between the brand and well known books or films. The Harry Potter: Hogwarts Castle set (model number 71043) features over 6000 pieces and 27 microfigures of characters from the story.

View the catalogue entry for this Harry Potter: Hogwarts Castle set on thesaleroom.com. Plenty of Lego models have so-called crossover appeal. Here is an example of one that might find favour with both enthusiasts of cars as well as Lego.

The Lego Creator Volkswagen Beetle set (model 10252, now retired) features a classic 1960s VW Beetle which has a surfboard and a cooler box to the roof, as well as a tilting rear seat revealing a storage compartment complete with beach towel.

This new and sealed example at Cottees is estimated at £70-90.

View the catalogue entry for this Lego Creator Volkswagen Beetle set on thesaleroom.com. 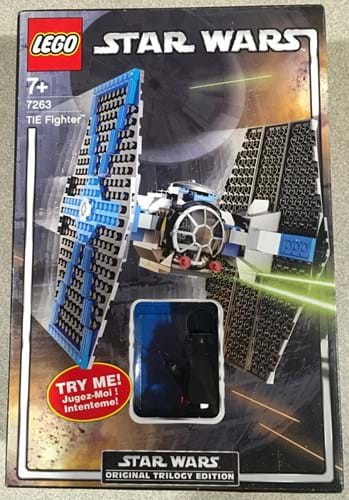 The large single-owner collection at Cottees includes plenty of affordable Lego models. Among them is this Lego Star Wars Tie Fighter set, original trilogy edition (model 7263) which is now retired.

View all the lots in the single owner sale at Cottees.