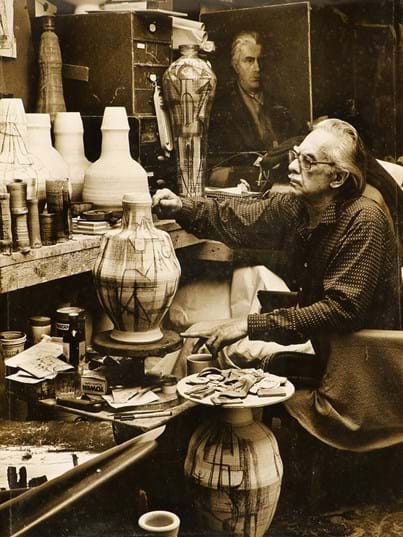 Sworders was first approached with the idea of selling the collection last summer by the Washington Foundation. Some of these wares had remained in situ in the artist’s Essex woodland studio for more than two decades.

“Our first visit was like walking into a labyrinth of his life’s work” recalls Sworders’ specialist John Black. “There were unfinished pots, test glaze pieces stuck to the walls, brushes and paint loosely tossed into jars, objects and cut-out pictures pinned to the walls - it was almost as if he had just walked out the door”.

Born in south-east London, ‘Bob’ Washington had followed his artist father to Goldsmiths' College and then the Royal College of Art to study painting but had later moved to the pottery department headed by William Staite Murray (1881-1962). Murray would remain key influence as would Dora Billington (1890-1968) who taught him taught the practical aspects of pottery at the Central School of Art and Crafts.

For much of his career Washington worked in education. He was involved in educational programmes first at the Derby School of Art, either side of war service, and then in at the Margate Schools of Art before he was appointed Art Inspector for Essex.

While he maintained his own studio, it was only after retirement in 1979 that he had the opportunity to properly rekindle his work with clay. Work from this more experimental period include a series of stoneware bottle forms heightened by stylised painted figural decoration. They were sold at the time via a series of dealer exhibitions, including London solo shows at the Anatol Orient Gallery and Paul Rice.

A total of 62 pieces in a number of mediums will be offered for sale - a selection appearing below. A stoneware circular platter by Robert Johnson Washington from the series 'The Elements, 48cm diameter, estimate £300-500 at Sworders.