24 December 2020 Whatever you call them – slot machines, fruit machines, one-arm bandit – a vintage coin operated machine could be a great talking point in your lounge.

Especially one contained in the belly of a leprechaun, which is indeed one of the options to bid for when a collection of such machines is offered in the Cottees’ auction in Poole on January 9.

The term slot machine was originally used for vending machines but generally became accepted as meaning gambling devices in the 20th century.

According to Britannica.com: “The first slot machines in the modern sense were invented by Bavarian-born American inventor Charles August Fey, at the time a mechanic in San Francisco, who built his first coin-operated gambling machine in 1894. The ubiquitous reel symbols of various fruits were first used in 1909 by the Industry Novelty Company.”

After the Second World War the machines “came into worldwide use as governments were drawn by the prospect of tax revenue” – encouraging the long lines of machines now famous from Las Vegas.

A wide array of coin operated machines is available. Here are five suggestions from the Cottees sale.

Maybe have luck of the Irish

According to the Cottees cataloguer, this Sega slot machine (pictured top) is set in a “full-size leprechaun”. We are not sure how big a leprechaun is in real life, but it is mightily impressive nonetheless and – operated by a 6d coin – is estimated at £3000-5000.

To bid for this Sega leprechaun slot machine try thesaleroom.com.

Lot with a slot A classic Columbia one-arm bandit slot machine, which works on 6d coin, sold with key in what is described as working condition, is estimated at £400-500. This ornate machine is a Mills ‘bursting cherry’ one-arm bandit. Working on a 5 cent coin, it comes with key and is estimated at £2000-3000. It is catalogued as featuring a “scarce melon top award” and “has gold jackpot award etc”.

You can bid for the Mills ‘bursting cherry’ one-arm bandit via thesaleroom.com. This Allwin Lucky Twelve plays on an old 1d play and comes with keys. The estimate is £300-500. 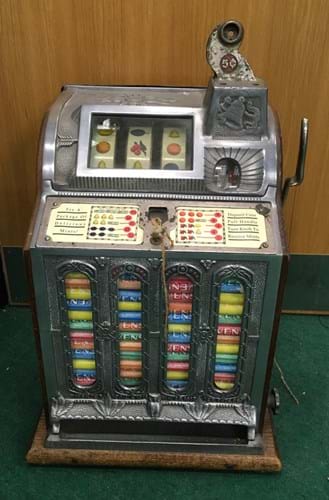 You can bid for the Mills FOK Vendor one-arm bandit using thesaleroom.com.