14 July 2021 It has certainly been an eventful summer for England fans. But, even if they think it’s all over, they’re still plenty of action taking place when it comes to the football memorabilia market. To give you a flavour of what’s still coming up this month, here’s our pick of five lots that relating to the England national team. Who can forget 1966 and World Cup Willie? This picture card is autographed by George Claydon (1933-2001), an actor who was the Official World Cup Willie, England's mascot. It comes with a letter of confirmation from him.

The lot is estimated at £60 at Brian Reeve on July 28-29. View the catalogue entry and bid for this World Cup Willie card on thesaleroom.com. Mitre 5 football signed by a group of England players from the 1980s – estimated at £30-50 at Thimbleby & Shorland.

Offered at the Thimbleby & Shorland timed sale ending on July 25 is this Mitre 5 football which has been signed by a group of England players from the 1980s including Bryan Robson, Peter Shilton, Kevin Keegan, Trevor Brooking, Trevor Francis, and Steve Coppell.

It is estimated at £30-50. View the catalogue entry and bid for this signed football on thesaleroom.com. The 1982 World Cup might not have been that memorable for England fans, but the kit worn by the Three Lions certainly was. These two shirts, a No 7 and No 9, are both signed by Kevin Keegan.

Keegan was sadly suffering from a chronic back injury and did not feature in any of England's group games. He did appear as a substitute for England's final second-round game against hosts Spain, a 0-0 draw in which Keegan missed a great chance to score with a header and prevent England from going out.

The shirts are offered with a £100-150 estimate at Thimbleby & Shorland in a timed sale ending on July 25. View the catalogue entry and bid for these Kevin Keegan signed shirts on thesaleroom.com. 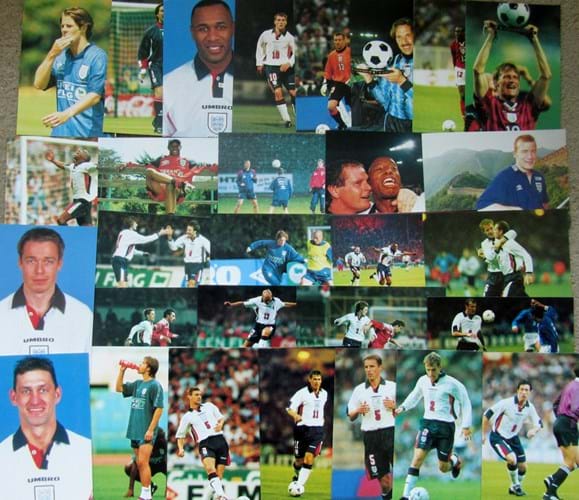 Examples from a group of 41 England football photo cards – estimated at £10-15 at Midlands Sports Auctions.

Plenty of football memorabilia appearing at auction is very affordable and it’s possible to start collecting without breaking the bank.

Among the more affordable lots at upcoming sales is this group of 41 collectors photo cards of the England 1998 squad. Offered all as one lot at Midlands Sports Auctions in a timed online sale that closes on July 18, they are estimated at £10-15.

You might even spot a certain Gareth Southgate in among them… whatever happened to him?

View the catalogue entry and bid for these England football photo cards on thesaleroom.com.

A 1961 full set of autographs from the England v Mexico match at Wembley – estimated at £25-30 at Midlands Sports Auctions.

The 8-0 win at Wembley in a friendly against Mexico in May 1961 ranks among England’s biggest ever victories. It’s not the biggest mind – that goes to the 13-0 drubbing of Northern Ireland way back in 1882.

But a rare memento of that game, in which Bobby Charlton scored a hattrick, appears at the Midlands Sports Auctions’ timed online sale that closes on July 18. It comes in the form of an autograph book which has been signed by the full set of players from both teams.

The vendor’s father worked in the football industry including for many of the top European clubs in dealing with all their requirements when playing European games or friendly tours. He was employed by Barcelona, Real Madrid and Athletic Bilbao among others.

The autographs are estimated at £25-30 at the auction. View the catalogue entry and bid for these 1961 autographs on thesaleroom.com.