18 February 2020 Film posters have become a major collecting area, with a combination of Bond/Star Wars/horror with a touch of Casablanca thrown in as the big hitters but also lots of options to suit most budgets. For something a bit different, why not go for original artworks to show off a unique slice of cinematic style and history? Surrey auction house Ewbank’s is offering a collection from WE Berry of Bradford on February 28.

The firm was one of the biggest printers of promotional posters in the UK but these lots on offer are the paintings produced ready for a final design.

Typical of the WE Berry artwork up for sale at Ewbank’s is this original hand-painted image for the UK film poster of the Ealing classic The Long Arm (1956) starring Jack Hawkins. The oil on board measures 12 x 21in (31 x 54cm) and is estimated at £150-250.

You can view and bid for The Long Arm artwork at Ewbank’s via thesaleroom.com

Don't wait a moment to bid Another classic from the WE Berry collection is this original hand-painted poster artwork for The Lost Moment (1947). The (50 x 38cm) design promoted a film noir starred Robert Cummings and Susan Hayward.

Estimated at £200-400, The Lost Moment film poster artwork at Ewbank’s can be viewed on thesaleroom.com Still one of the most controversial films ever released, Stanley Kubrick’s A Clockwork Orange (1971) was promoted by a suitably striking poster image. A quad advertising film poster, 2ft 6in x 3ft 4in (75cm x 1.02m), is on offer from East Sussex auction house Burstow & Hewett on February 19, estimated at £80-120.

To bid for A Clockwork Orange poster at Burstow & Hewett you can visit thesaleroom.com

All shook up by Elvis poster A rather cheesy film poster for your wall? Try this large original 1962 Italian issue film poster for Elvis in Blue Hawaii, measuring 3ft 3in x 4ft 7in (99cm x 1.4m). It is estimated at £60-100 in the February 25-26 sale at Merseyside auction house Omega.

To view and bid for the Elvis Presley Blue Hawaii film poster at Omega try thesaleroom.com 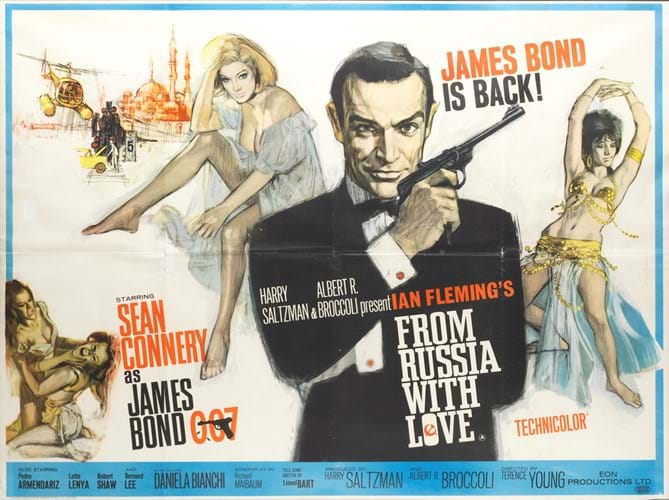 Looking ahead, on June 17 Bonhams is holding an entertainment auction in London offering early James Bond film posters. The never-ending 007 movie series will be in the headlines once again this April when the latest instalment, No Time to Die, is released.

Not that Bond needs much hype. The prices that original 007 film posters make underline their enduring popularity.

The James Bond film posters on offer at Bonhams will be available to view nearer the sale date via thesaleroom.com