27 October 2020 Fine and rare copies of history, literature, architecture and travel books feature prominently in the auction of a Kent manor house coming up this week. First edition of Edward Gibbon’s ‘The History of the Decline and Fall of the Roman Empire’ – estimated at £3000-5000 at Morphets.

The sale at Morphets of Harrogate on October 29 offers 251 lots which are being sold on behalf of a charitable trust. It includes works by famous names such as Edward Gibbon, William Bligh and David Roberts.

Here we pick out a five highlights.

A first edition copy of Edward Gibbon’s The History of the Decline and Fall of the Roman Empire printed for W Strahan & T Cadell features at the Morphets sale. It is one of only 1000 copies of the 1776 first edition printed.

The six volumes in 18th century calf retain all folding maps and amount to ‘an extremely good near-fine copy internally’.

View the catalogue entry for this Edward Gibbon first edition on thesaleroom.com. A copy of David Roberts’ The Holy Land is also part of the collection of books from a Kent manor house being offered at Morphets. Containing plates based on the artist’s drawings made in Syria, Arabia and Egypt along with descriptions by the Revd. George Croly, the images were lithographed by Louis Haghe of London, and published between 1842-1843.

View the catalogue entry for David Roberts’ The Holy Land on thesaleroom.com.

3. William Bligh’s account of the mutiny on the Bounty

A first edition copy of William Bligh’s ‘A Narrative of the Mutiny, on board His Majesty's Ship Bounty’ is also on offer at the Morphets sale.

It gives an account of the famous mutiny that occurred under his command during a voyage in the South Pacific in April 1789. After a group of disaffected crewmen led by Fletcher Christian took control of the ship, Bligh and 18 loyalists were cast adrift in the ship's open launch.

The first edition dates from 1790 and includes a large folding map and three other charts.

View the catalogue entry for this William Bligh first edition on thesaleroom.com. 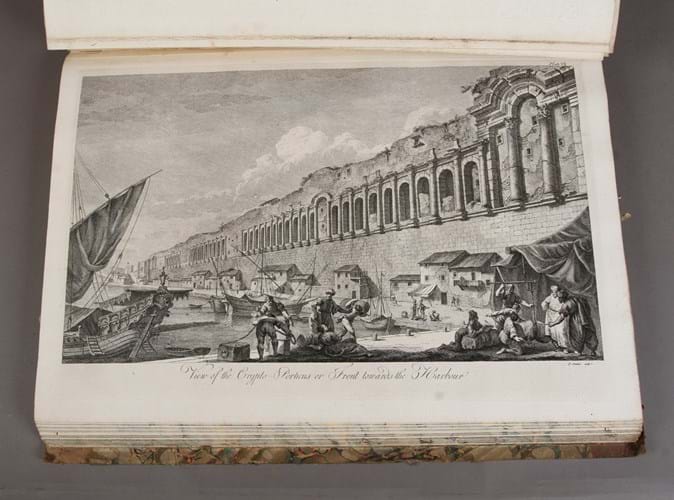 A 1764 first edition of Robert Adam’s ‘Ruins of the Palace of the Emperor Diocletian at Spalatro in Dalmatia’ – estimated at £2500-3500 at Morphets.

A rare 1764 first edition of Robert Adam’s ‘Ruins of the Palace of the Emperor Diocletian at Spalatro in Dalmatia’ will be offered as part of the manor house’s library collection.

The architect to the King and to the Queen was fascinated by the ruins near Split in modern-day Croatia which he explored with the French draughtsman Charles-Louis Clerisseau in 1757.

The book produced seven years later featured 60 plates with engravings after drawings by Clerisseau along with a commentary and imagined reconstructions by Adam.

View the catalogue entry for this Robert Adam first edition on thesaleroom.com. A finely-bound 15-volume set of Charles Dickens' works published in London by Chapman & Hall in c.1890 will be offered at the Morphets sale.

Including works such as Oliver Twist, Bleak House, Dombey and Sons and The Pickwick Papers, the set will be offered as a single lot estimated at £100-200.

Chapman & Hall enjoyed great commercial success with Dicken’s novels throughout the 19th century. As well as initially publishing instalments of some of his books (the final instalment of The Pickwick Papers sold 40,000 copies for example), they also produced later handsome sets such as this.

View the catalogue entry for this Charles Dickens set on thesaleroom.com.