Affordable art: Five works offered or sold for under £1000 including a colourful view of Trinidad

22 June 2020 Whether you are looking for a colourful modern scene or a rare historical work, there are plenty of great pictures being bought and sold at auctions on thesaleroom.com every week.

South-African born artist Cecil Rochfort D'oyly-John (1906-1993) apparently started painting when recovering from an injury sustained in the Second World War. He is known for his bright views of the South of France, having lived in Cannes before coming to England and settling on the south coast.

He learnt a technique of applying thick layers of paint using a palette knife, something he adopted after seeing a Belgian painter using this approach during a holiday.

While his views of the Mediterranean appear more commonly at auction, this 13 x 2ft 3in (33 x 68.5cm) signed oil on canvas depicts Trinidad but is still highly representative of his style, subject matter and use of colour.

View the catalogue entry for this painting by Cecil Rochfort D'oyly-John on thesaleroom.com. Ken Moroney (b.1949) is a self-taught artist of Anglo-Irish parentage who grew up in south London. Known for his impressionistic style and bold use of colour, his work has been exhibited at both commercial and public galleries in London, Paris, New York and Canada.

Romantic landscapes are part of his oeuvre including, as with this example, those depicting scenes reminiscent of earlier times.

View the catalogue entry for this painting by Ken Moroney on thesaleroom.com. 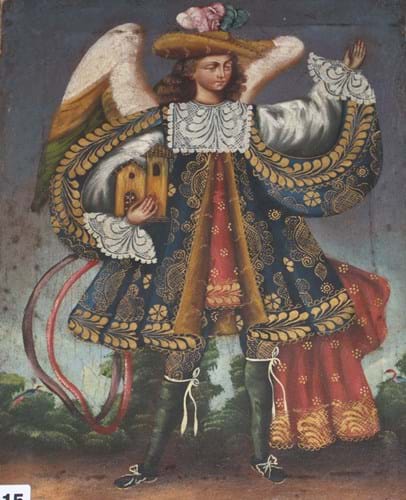 A painting catalogued as ‘Cusco School’ – £460 at Gorringe’s.

Catalogued as ‘Cusco School’ and estimated at £50-80, this unusual oil on canvas of the Archangel Gabriel drew interest at Gorringe’s of Lewes, East Sussex on May 18.

The attribution refers to the group of European and indigenous painters active in Cuzco, Peru between the 16th to 18th centuries.

On the day, it drew a number of interested parties and sold at £460. Watercolour with automobile subject – £70 at Laidlaw.

A watercolour study of two classic cars sold above a £30-60 estimate at Laidlaw of Carlisle, Cumbria on May 16.

The picture was dated 1992 and had an artist’s monograme ‘CJE’.

To the lower right was a single-seater sports car for which the number plate identified the car as a 1934 Lagonda Rapier supercharged fixed-head coupé which was built by Abbott of Farnham and delivered to Lagonda's main agent in London, Warwick Wright.

One of two etchings by William Lionel Wyllie – £500 at Gildings.

London born etcher, watercolourist and painter William Lionel Wyllie (1851-1931) came from a family of artists and specialist in marine pictures and views of the Thames.

Two etchings, one titled Unloading Coal, Medway and the other East Coast Port (shown above) which were offered together at Gildings of Market Harborough, Leicestershire on May 12, drew interest against a £150-200 estimate.