Affordable art: Beryl Cook print features in our pick of five works for under £1600

29 December 2020 Works from a humorous Beryl Cook print to an English watercolour landscape feature in our latest pick of affordable art on offer or sold recently on this website. Beryl Cook’s (1926-2008) distinctive style and subject matter, combining humour, distinctive plump figures and a certain seaside-postcard sauciness, have made her works some of the most recognisable and popular in modern British art.

While her original paintings and works on paper now sell for substantial sums, her prints are a great alternative for a more affordable option.

A number of examples are included in East Bristol Auctions’ sale on December 30, including the limited edition signed print titled Dining In Paris, pictured above. It is estimated at £50-80.

View the catalogue entry for this Beryl Cook print on thesaleroom.com. ‘The Valley at Mouthiers, near Angouleme, France’, a watercolour by Martin Hardie – estimated at £120-180 at Claydon Auctioneers.

A watercolour by English artist Martin Hardie (1875-1952) is among the lots at Claydon Auctioneers on December 30-31.

Martin Hardie was born in London and studied at the Royal College of Art under Sir Frank Short. Short appears to have influence both his artistic technique and approach to landscape and seascape painting.

This 13 x 21in (33 x 53cm) watercolour depicts a scene in France – the Valley at Mouthiers, near Angouleme – and also has a reputed provenance to of Professor Morton Norton Cohen of the University of New York.

View the catalogue entry for this Martin Hardie watercolour on thesaleroom.com. A painting of a grey horse and cart by Harry Fidler – £1500 at Tennants.

Farm animals, especially horses, were Harry Fidler’s (1856-1935) preferred subject matter. This typically impressionistic depiction of a farmhand leading a grey horse and cart was one of six sold at Leyburn saleroom Tennants on November 14. 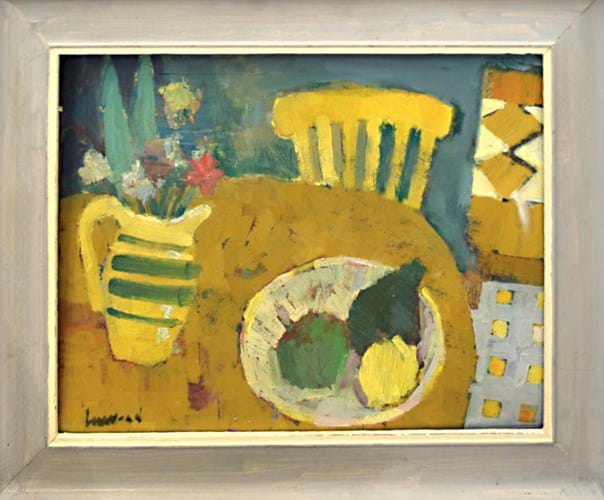 Ronald Lowe (1932-85) is best known for the dramatic views of his native Yorkshire and Wales, where he lived and worked from 1959.

This typical 15 x 19in (38 x 49cm) oil on board, titled Pembrokeshire Nocturne and dating to the c.1960s, tipped over top estimate at The Welsh Sale at Rogers Jones of Cardiff on December 5.