One of the most active areas of the collecting market, modern first edition books remain highly popular at auction as buyers seek out works by their favourite authors. Thousands of books appear at auction every week on the-saleroom.com and many bidders enjoy the challenge of tracking down rare first editions to add to their collection.

Among the reason first editions tend to be the considered so valuable is that collectors like to own a copy of the original ‘untouched’ book before it had either achieved recognition (or notoriety in some cases) or had become a best seller.

Buyers like to feel connected to author and enjoy the experience of opening an important book as it first appeared. Nostalgia may also play a part in it too as some buyers look to purchase books they originally read when they were young.

There are plenty of different ways to collect first editions. Some buyers look for particular authors and, unsurprisingly perhaps, some of the biggest names in 20th century literature are among the most sought after such as Agatha Christie, Graham Greene, Ernest Hemingway and Ian Fleming.

Other collectors may focus on particular genres such as modern classics, detective stories, horror books, science fiction and children’s literature. Then there is a host of other categories: for example, there are collectors who look for particular publications such as Penguin Classics, illustrators like Arthur Rackham or Quentin Blake, or even copies of Nobel Prize winning literary works.

Another reason some buyers are drawn to modern first editions is their investment potential. Some books have grown in value hugely due to the author’s works becoming more favoured by collectors as time goes on. 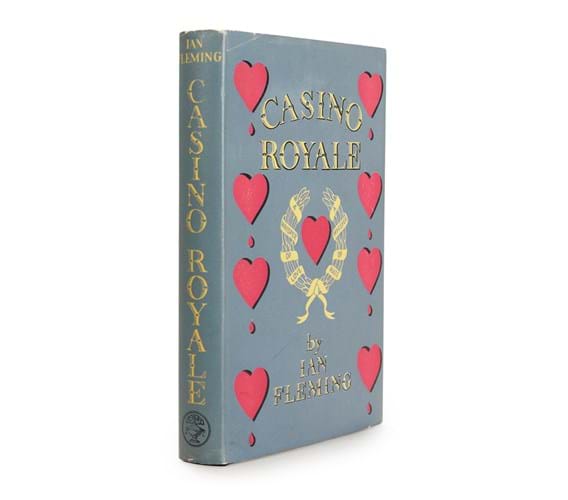 A good example is Ian Fleming’s James Bond books. The first Bond book, Casino Royale was issued in 1953 with a print run of just 4760 copies, of which about 3000 were ‘first impression’ copies with dust jackets without the Sunday Times review overprinted on the front flap that appeared slightly later. Those latter copies were selling at around £300-400 in the 1980s but rose to approximately £1500 in the early 1990s. They are now selling for over £20,000.

A first edition is generally considered to be a copy of a book in the form when it was first available for sale. Sometimes such a work can be easily identified by the words ‘first edition’ on the copyright page. At other times it is indicated instead by the date, number line, type setting or print marks.

For example, first editions of JK Rowling’s Harry Potter and the Philosopher's Stone from 1997 have a print line that reads ‘10 9 8 7 6 5 4 3 2 1’. With only 500 hard back copies printed (of which 300 went to public libraries), they have now become extremely valuable with some copies having made £50,000 or more at auction. The first paperback edition is also quite rare and can easily fetch over £3000 at auction. Desirability and rarity are two obvious factors in determining value in the market for first editions. The status of the author, the importance of the work itself and how collectable it have become key factors in driving demand, while the number of copies that were produced, and the number that have subsequently survived, will regulate the supply.

If something elevates a particular copy above the ordinary it will naturally make more. So the presence of the author’s signature can multiply the value of a copy by several times, while a dedication (something that will normally make it unique) will raise its price further still. The author’s proof copy is often considered the ‘Holy Grail’ for collectors, especially if has the author’s own corrections and revisions which can also add academic interest in many cases.

While you can get a general idea of how much particular first editions sell for at auction using our price guide (you can search by author name or book title), a number of factors relating to the individual qualities of a copy play a crucial role too.

Among these factors is the presence of the book’s original dust jacket. Along with its condition and the general state of the book itself, the dust jacket can have a 10-fold influence on the price of a work.

Dust jackets started emerging in the early 19th century and were originally designed to be discarded. However, by the early 20th century, dust jackets had become a key visual component of the book and were designed with appealing imagery to engage buyers in bookshops.

The inter-war period is regarded as the age when the dust jacket became a real art form with established professional illustrators in high demand for their skill, flair and imagination. Among the sought after names when it comes to dust jacket design is Richard Chopping, who produced those designs found on many of the James Bond first editions. A 1962 first edition of Anthony Burgess’s ‘A Clockwork Orange’ with its dust jacket still in glassine wrappers – £700 at Golding Young & Mawer in January 2021.

These days collectors tend to prefer unrestored dust jackets, so look out for any signs to see if has been tampered with.

Decide how much you’d like to spend and use the search facility on thesaleroom.com to find First Edition books coming up for sale.

To research recent prices at auction to see how much different books sold for you can also try out the Price Guide.