Ercol became one of the best-known British furniture brands in the 1950-60s and is still in production today. An Ercol light elm sideboard with three cupboard doors and single long drawer under all with recessed Windsor handles – £260 at Rendells in May 2020.

Founded in 1920 in High Wycombe, Buckinghamshire by Lucian Ercolani (1888-1976), Ercol chairs and tables came to prominence in the aftermath of the Second World War. They have been popular ever since.

Although Ercol is still making furniture today (typically sold in departments stores) it is easy to pick up vintage and second-hand items at auction via thesaleroom.com.

Ercolani was born in Tuscany in Italy. He came to London when his father, a frame maker, migrated to England in search of work.

He enrolled in the Shoreditch Technical Institute as a young man and, after passing his City and Guild exams, joined Frederick Parker furniture in 1910.

After deciding to branch out on his own and securing funding from investors, he launched Furniture Industries in High Wycombe in 1920, the company that would become Ercol in the 1940s.

High Wycombe had been a centre of production for locally-made and functional furniture (sometimes called ‘vernacular furniture’) for a long time and, by taking hand-made traditions and mechanising the production, Ercol began to grow rapidly.

Unlike a lot of other furniture innovators working at this time, the distinguishing feature of Ercol furniture was its reliance on solid timber (notably beech and elm).

Ercol expanded both its production runs and range of designs and in the post-War period it showcased its modern twist on classic styles at the Britain Can Make It exhibition and the Festival of Britain. This Ercol dining set, sold for a mere £85 at East Bristol Auctions, shows how darker-coloured furniture might be less popular with some buyers at the moment but if you are furnishing your home on a budget and would like some classic well-designed mid-century modern items this sort of table and chairs come up regularly at auction.

Ercolani’s tables, chairs and his upholstered pieces have become a traditional staple of British furnishing. They were very popular and, as a consequence, were produced in large numbers.

The volume and long production of Ercol means there is a good deal of this furniture around today on the secondary market in auctions, especially dining sets, chairs and occasional tables.

The quantity of supply means examples can now be bought at auction for under £50 with pieces from the later part of the 20th century being particularly affordable.

In the past couple of decades there has been a revival of interest in early post-War designs and some of the firm’s current designs are based on its mid-century classics.

Buying an ‘original’ from the 1940s or 50s at auction can therefore be great value compared to buying ‘new’. While most Ercol material is very good value at auction, the more unusual, scarcer pieces command a premium. In this market, an auction price of £1000 would be considered a top-end sum. This dining table and chairs set by Ercol shows the practical side to furniture, with the table having two leaves to extend it. It sold for £900 at Peter Wilson in August 2020. The table has an elm top and beech legs.

Generally, the most desirable pieces are those in the lighter, blonde woods of elm and beech in a natural wax finish rather than those stained a darker colour.

Good dining sets can be bought in the £400-800 range, while a budget of £200 would still give opportunities to acquire a decent set of chairs, a cabinet or a sideboard for example.

As with all areas of the antiques and vintage market, condition is a key determinant of value. Two otherwise similar pieces of Ercol from the same period can make very different prices due to this critical factor.

It should be remembered that pre-owned furniture is naturally likely to have some signs of wear but, if necessary, items can be restored, including those well-loved vintage pieces.

Ercolani took particular interest in the Windsor chair – a design that dates back many centuries – which is considered one of the classics of English country furniture.

As his business grew, one of his most famous ranges was Ercol’s Windsor series which began with the development of the traditional Windsor chair into a production-friendly design. 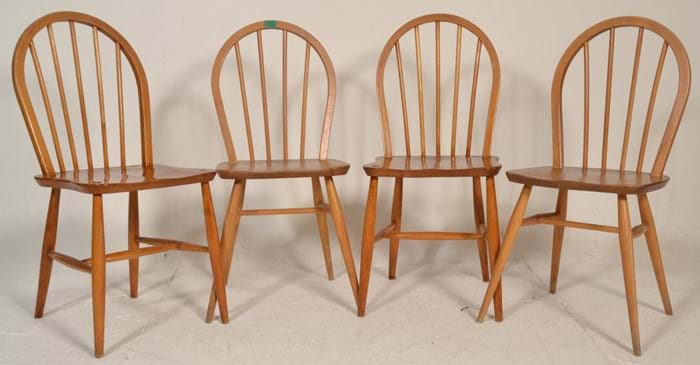 A commission soon followed from the Board of Trade during the Second World War for 100,000 Windsor kitchen chairs – the company’s largest order to that date.

The range, which later expanded to other items such as cabinets and couches, has been in production since 1947, and enthusiasts regard it as an icon of British furniture design.

Increasingly buyers are looking at the green credentials of what they purchase. And few things can match antique or vintage furniture for being environmentally-friendly.

The carbon footprint of a second-hand chair or table is much lower than that created by its brand new flatpack alternative.

Decide how much you’d like to spend and use the search facility on thesaleroom.com to find Ercol furniture coming up for sale.

To research recent prices at auction to see how much different types of furniture sold for you can also try out the Price Guide.