Swiss watchmaker Audemars Piguet dates back to the late 19th century but the brand reached its prime only in the 1970s. 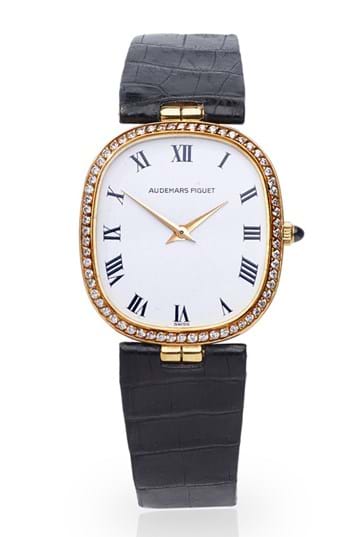 The company was founded by Jules-Louis Audemars and Edward-Auguste Piguet in the Vallée de Joux region of Switzerland in 1875. It remained independent of large corporations with the firm being retained in the families of its founders.

Although it produced many fine watches and movements over its first 100 years, it was a relatively small producer compared with the big watch manufacturers like Rolex and Patek Phillipe.

However, it was the launch of its much-admired sports watch in 1972 that made the company world famous.

Its key features were its bold sporty design, octagonal shape and striking (but unconventional) steel case.

It was designed by the legendary watch designer Gérald Genta (1931-2011) who was reputedly inspired after seeing a deep-sea diving helmet with eight visible screws. He decided to make parts visible in the watch that previously had been concealed.

Another major development came in 1993 with the launch of the Royal Oak Offshore which, with its a 42mm diameter dial, marked a new trend of large-sized watches. Its substantial presence on the wrist means it is sometimes dubbed ‘The Beast’. The brand has also been enhanced by celebrity endorsement from names such as Arnold Schwarzenegger, who sported a specially designed limited edition Audemars Piguet Royal Oak Offshore in two of his films – “End of Days” and “Terminator 3” – and British heavyweight boxer Anthony Joshua.

If a new Audemars Piguet is too pricey or doesn’t provide the classic style you are looking for, a second hand one at auction could be just the thing. Plenty of examples with a range of dates are available to buy at auctions on thesaleroom.com.

Many auction houses hold regular specialist watch sales or watches and jewellery sales, while others include a selection of watches within a bigger auction, making it easy to find plenty of Audemars Piguet watches at any time of year. A rare gentleman's stainless steel Audemars Piguet Huitieme watch dated 1989. Offered along with its original box, pouch, guarantee and swing tag, it sold for £4200 at Watches of Knightsbridge in May 2022.

Condition, age and rarity determine the prices that second-hand Audemars Piguet watches will sell for at auction.

The entry-level price for a good example at auction is typically around mid-three figures.

At the top end, the rare Audemars Piguet Royal Oaks with their original box and papers can fetch £10,000 or more.

Check the auction house’s lot description. It will typically state whether the Audemars Piguet you are considering bidding on is in working order or needs repair. Some watches may have been repaired in the past in which case some of the parts, for example, may not be the originals. That would make it less desirable for a specialist collector and thus more affordable for you. Items in pre-loved condition can be bargains at auction. Thus gentleman’s 18ct gold Audemars Piguet wristwatch with a black dial had some scratches and signs of wear. Offered along with an Audemars Piguet pouch and spare leather strap, it sold for £1200 at Gorringes in March 2022.

You can request a condition report from the auctioneer if it is not already in the lot description. Attending a viewing in person will also enable you to try on the watch you are considering bidding for and inspect it for yourself close up.

Decide how much you’d like to spend and use the search facility on thesaleroom.com to find Audemars Piguet watches coming up for sale.

To research recent prices at auction to see how much different Audemars Piguets sold for you can also try out the Price Guide.

An expert’s guide to buying tables at auction